Menu
Wenceslas Square, originally called Horse Market was established with the formation of the New Town in the middle of 14th century. Today it is the main center of Prague, actually only one true
Prague boulevard, 750 meters long with wide tree-lined  sidewalks paved with Prague cubes (the technical term) assembled into mosaics, the center of Prague’s business, entertainment, social and political life, gathering place for population during important historical events. It is not worth   to describe WenceslasSquare on the „Prague unknown“ elaborately, but I focused on the details of interesting buildings, interiors of buildings and arcades, just about pecularities  that we often pass by, but do not notice them.
One of the remarkable landmarks of Wenceslas Square is a multi-functional complex of three buildings that make up the corner of Wenceslas Square and Stepanska Street – St. Stephen’s Street. These houses werebuilt between 1912-1916 designed by a leading architect of the Art Nouveau period and cubism Emil Kralicek, who was designing under the auspices of Matej Blecha´s construction company. That was the reason, why it took a longer time to attribute  his designs to him (either the author was featured  as unknown or his workswere attributed to other architects). This complex of buildings is often referred as Supich´s houses. This structure is characterized by a mixture of geometric modernism with elements of cubism, which we can seeon the striking facade. In contrast to the outer facade the courtyard  facade is very modest.  From the outside,the buildings have brutalist impression and we feel that those buildings could have been built at the time inNew York. Within a block you’ll find extensive system of passages – the Rococo passage  inclined togeometric modern, especially its over-arching glass domes, while the Lucerna passage  was built in at that time disappearing art noveau style. 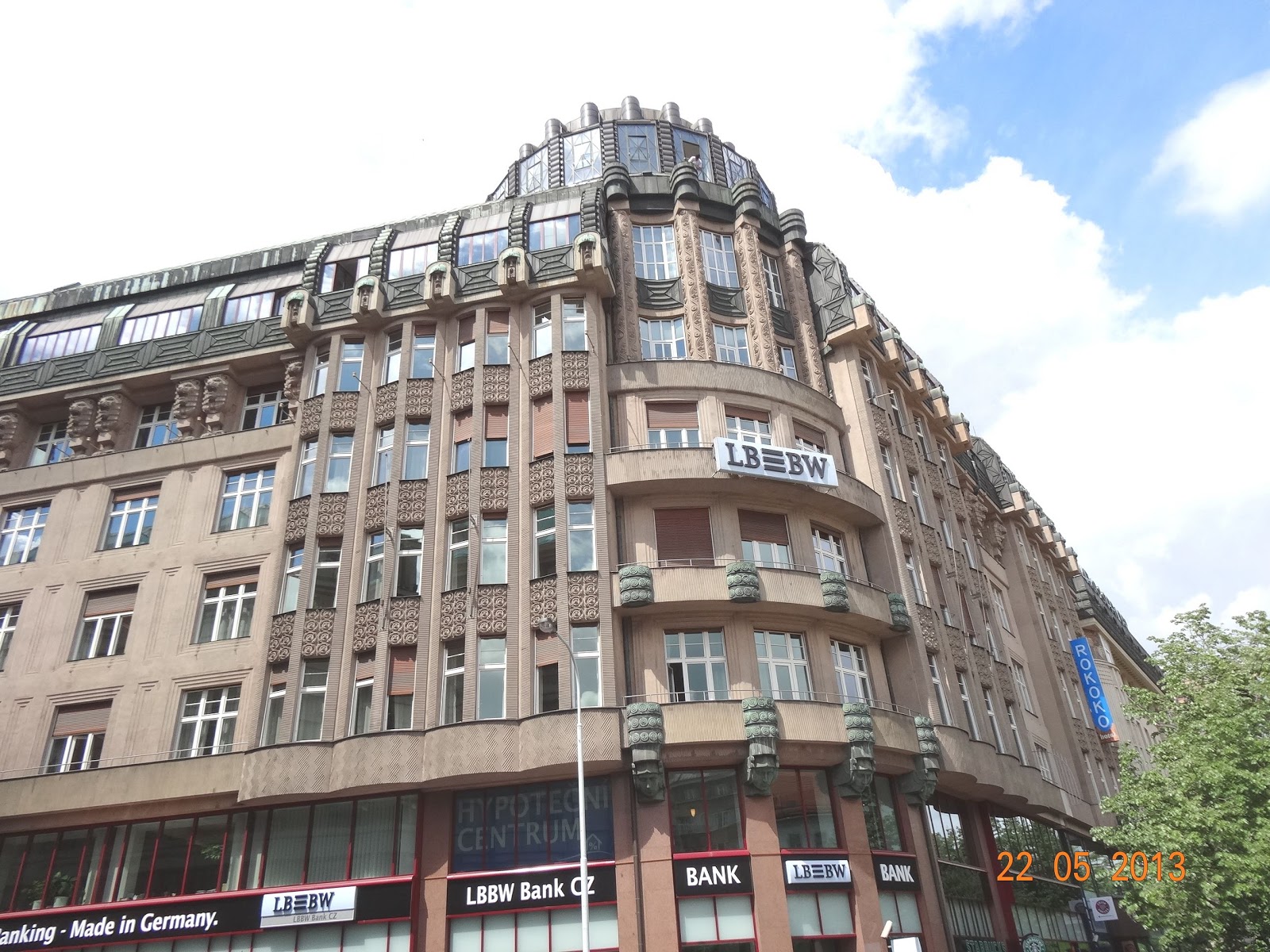 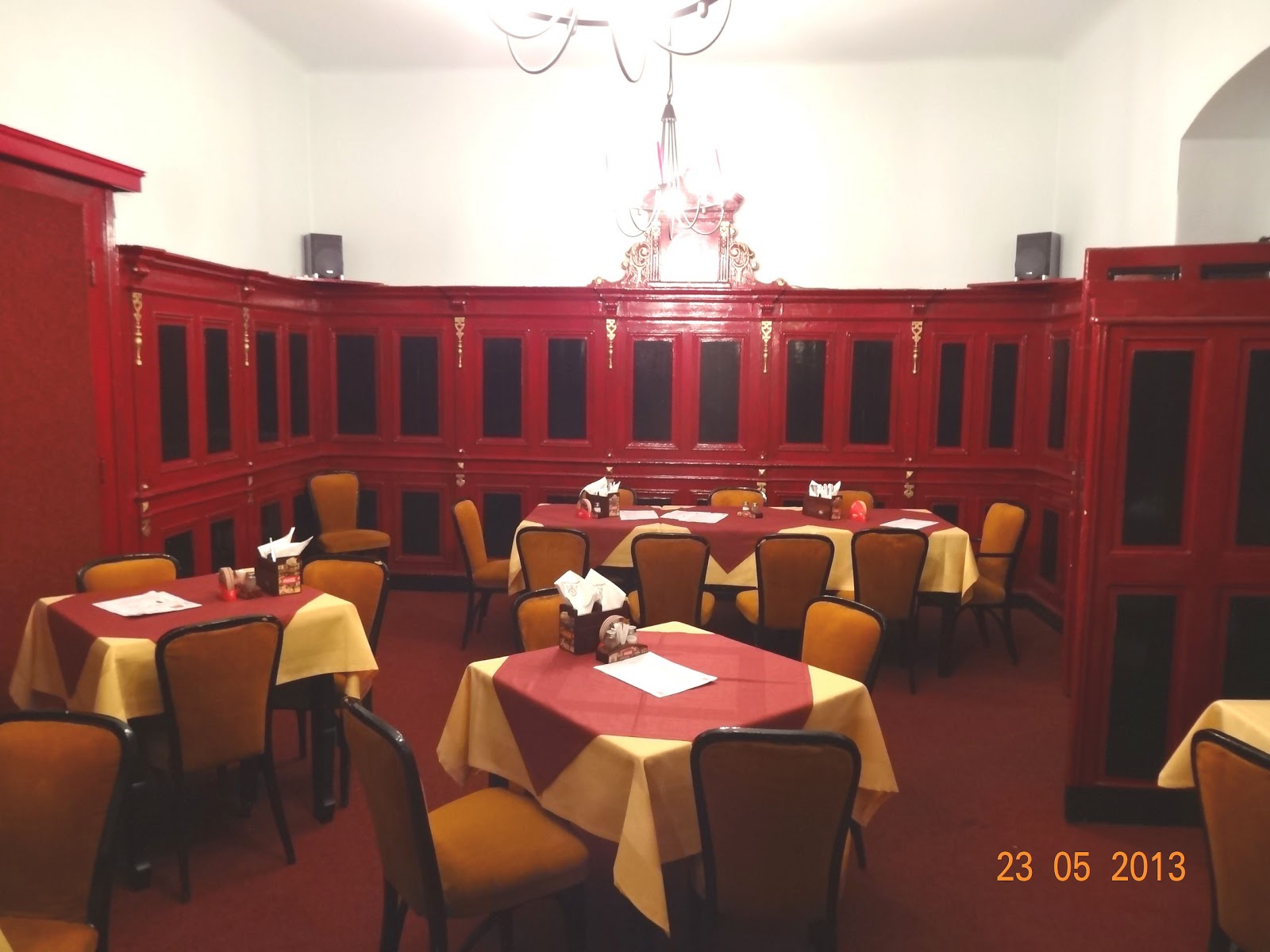 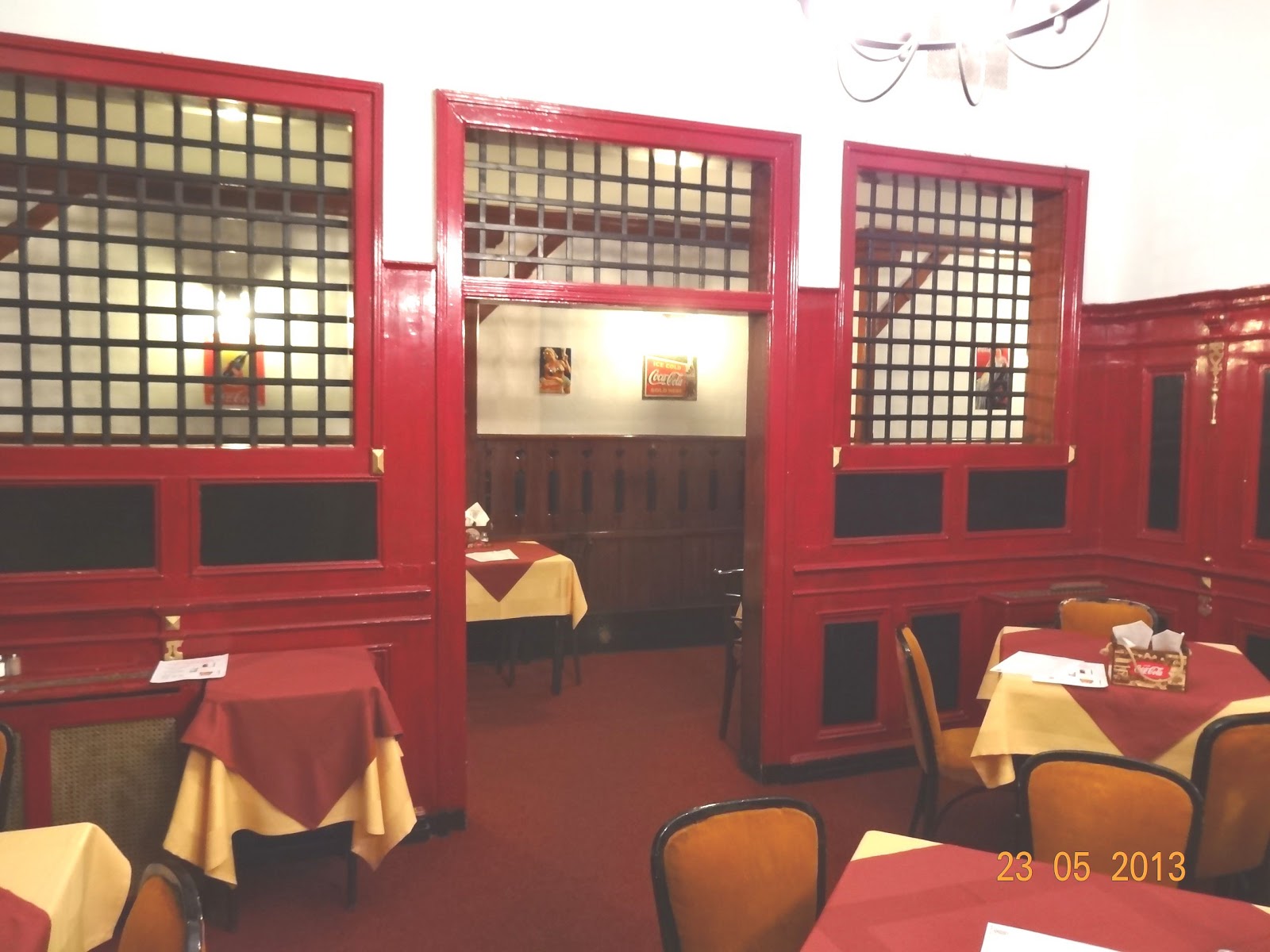 Hotel Yalta was built in 1958, designed by Antonin Tenzer in the late socialist realism ( also called as Stalin gothic)  style with the influence of functionalism.  Not socialist ornament but tasteful geometric shapes were used for Socialist realism architectural style in its late stage. Design of the building is of the highest quality. A unique feature is its own fallout shelter, secretly hidden in second basement with thick walls, which shouldprevent the penetration of radioactivity. 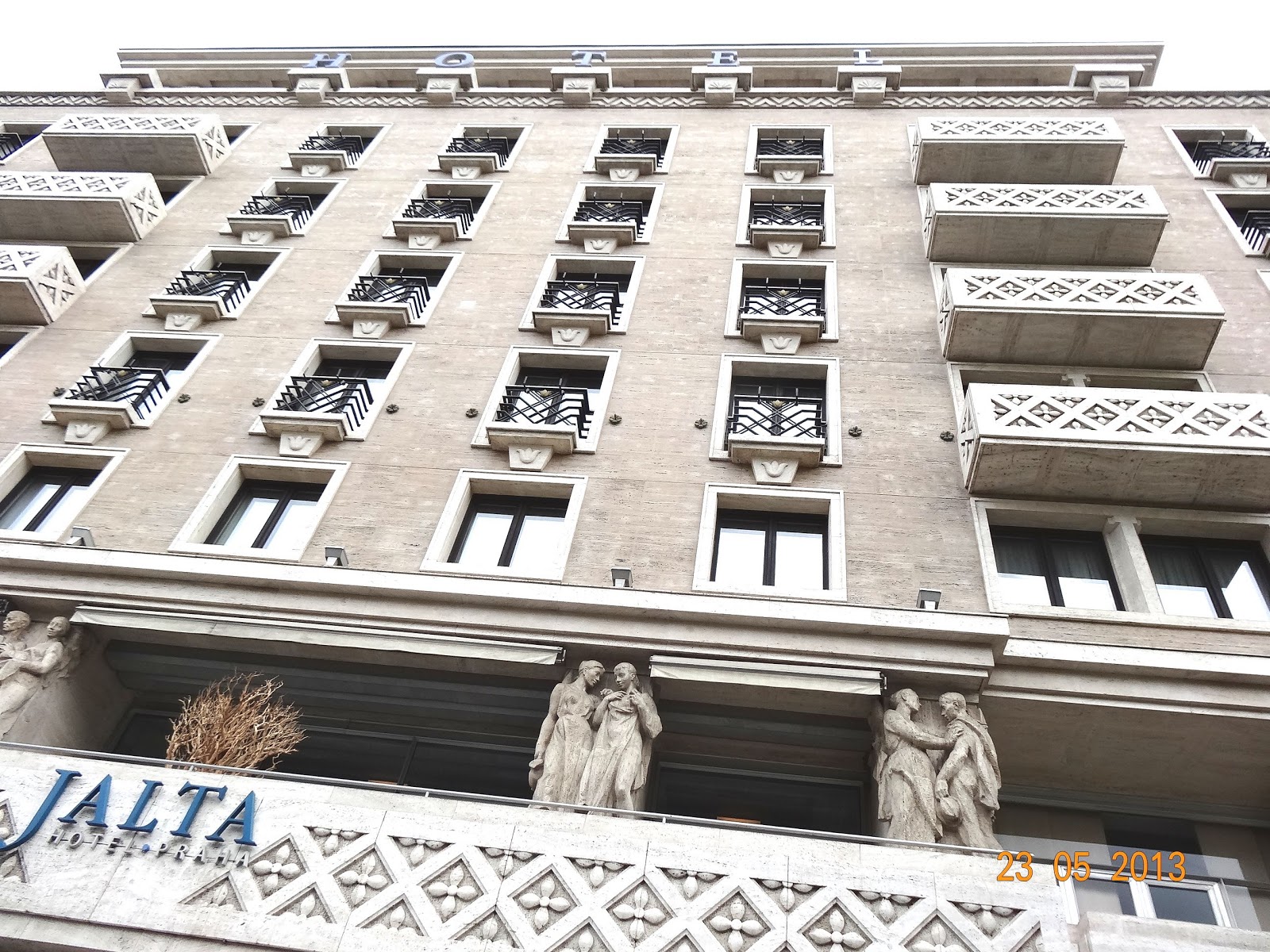 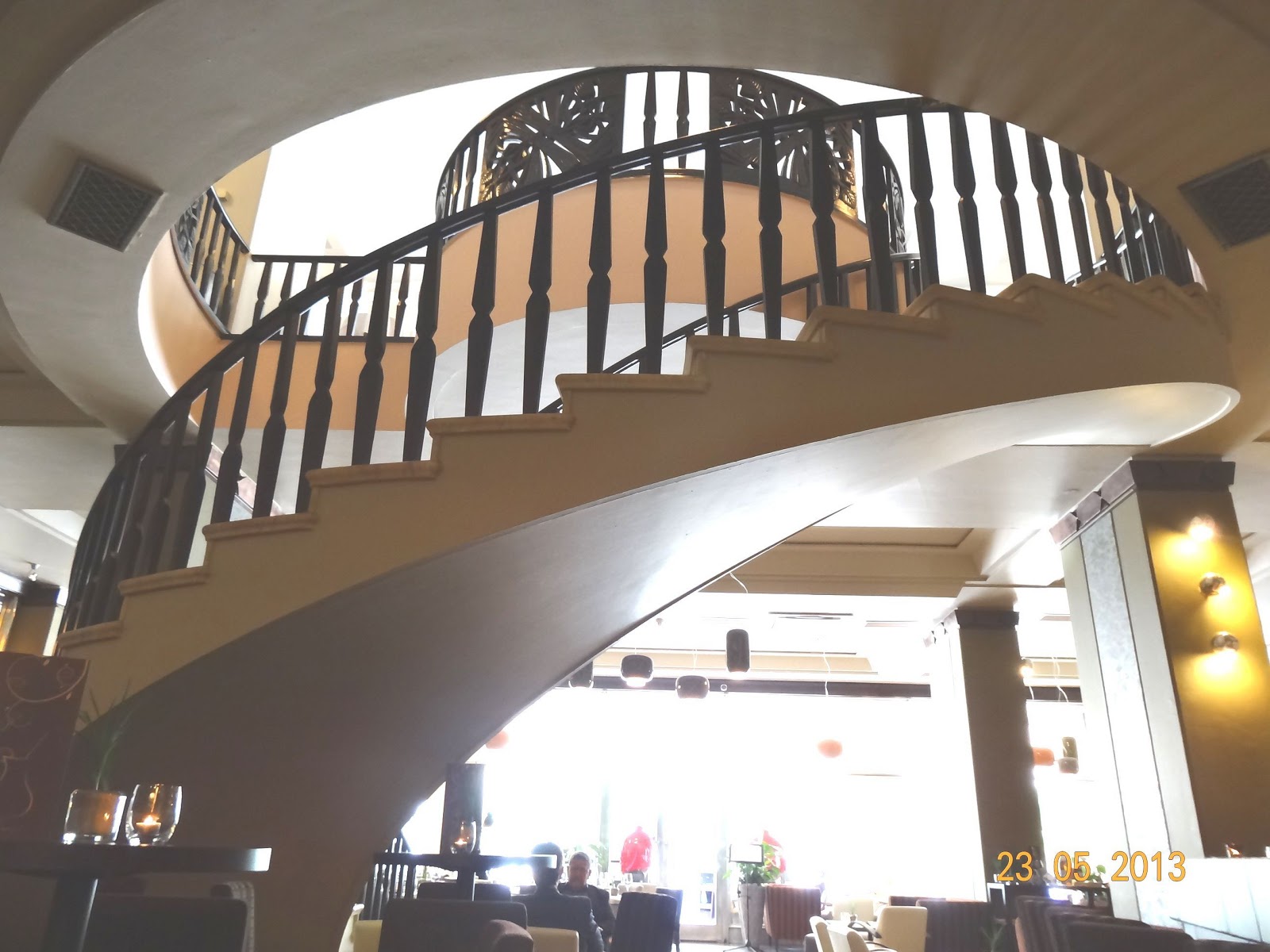 At the end of the 19th century New Town became the center of the newly developing city. But the foundation of its medieval streets can not be sufficed for the needs of a modern metropolis and the demands for the growing business network. Thus Prague phenomenon arose  – shopping passages, which allowed creation of new shops, restaurants, cafes and entertainment venues without additional street space.

At the corner of of Wenceslas Square and Vodickova Street you will find a striking building. On the site was originally an ancient house with a brewery which was demolished by architect Antonin Wiehl, who wasironically a functionary of many monument institutions. However, in 1895-96 he built as compensation one of the most beautiful houses of the Czech renaissance with rich genre painting of Mikolas Ales and JosefFanta. The painting represents the life cycle of a wealthy merchant. Antonin Wiehl donated his house toCzech Academy of Sciences, Documents and Arts. 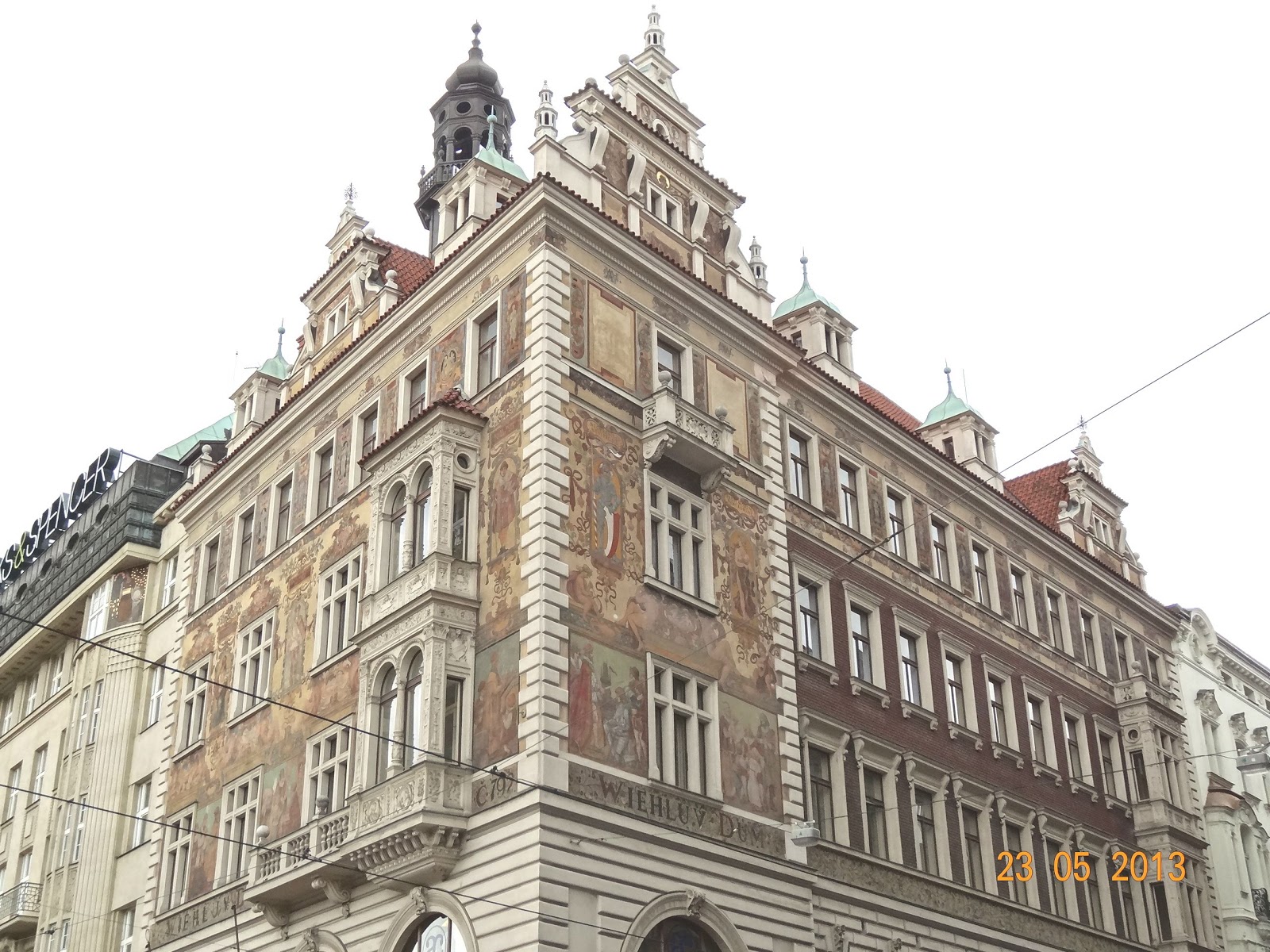 Representational neo-baroque palace of Italian insurance company Assecurazioni Generali designed by architects Friedrich Ohmann and Osvald Polivka was built in 1896. The insurance company was based here until WW2. 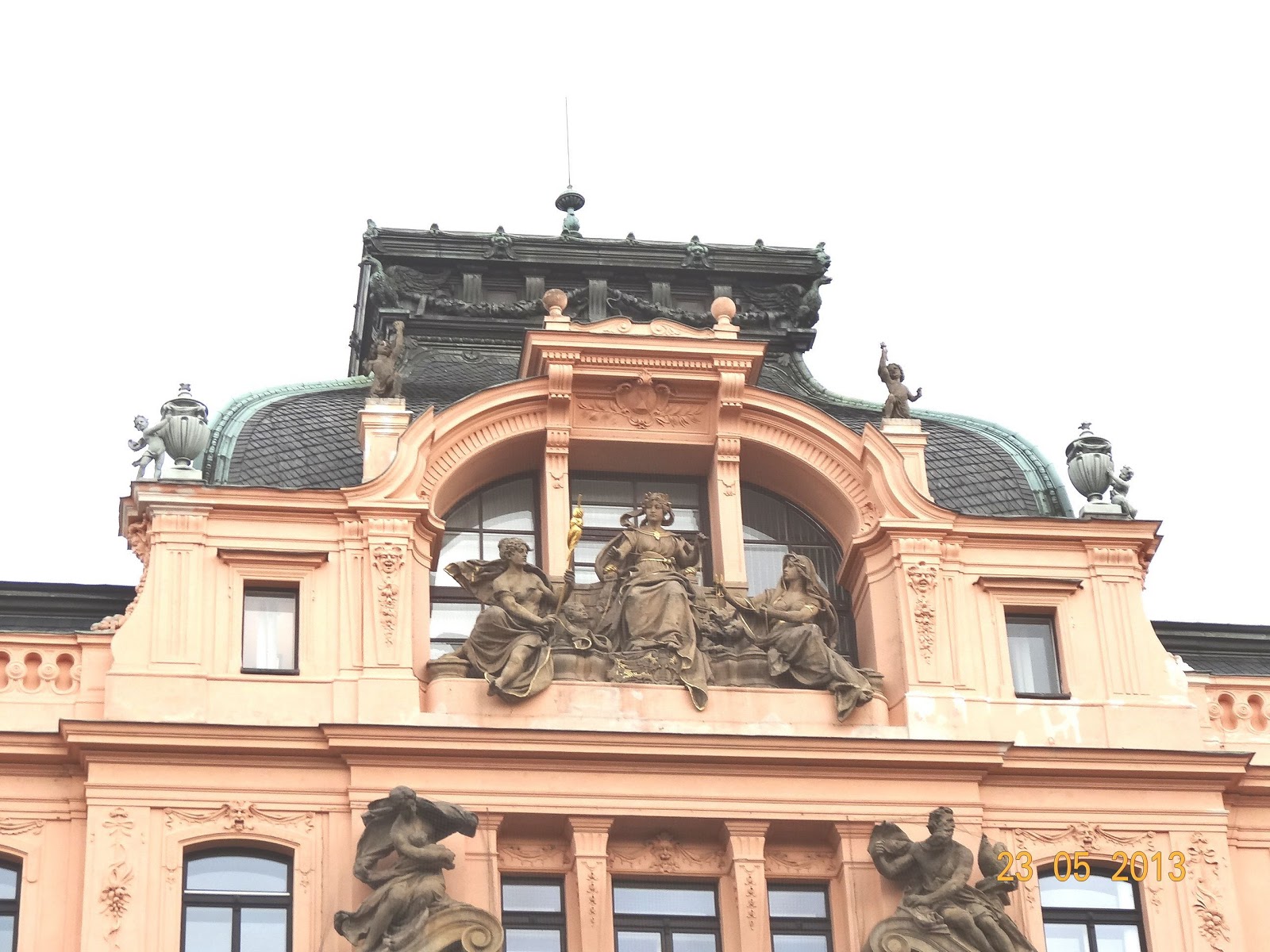 And just around the corner a different world – a quiet Franciscan garden inviting you to relax with a view of the Cathedral of Our Lady of the Snows and the complex of the former Franciscan monastery. Church of Our Lady of the Snows was founded by the Roman Emperor and Czech King Charles IV. in 1347 as a temple for the intended coronation. The church should be greater than the St.Vitus Cathedral itself – 100 mlong  with  the height of the ship of 40 meters. However the implementation of a bold project was interruptedby the Hussite wars and only the presbytery was implemented. Even the size of presbytery, however, can demonstrate you how magnificent the church had to be. 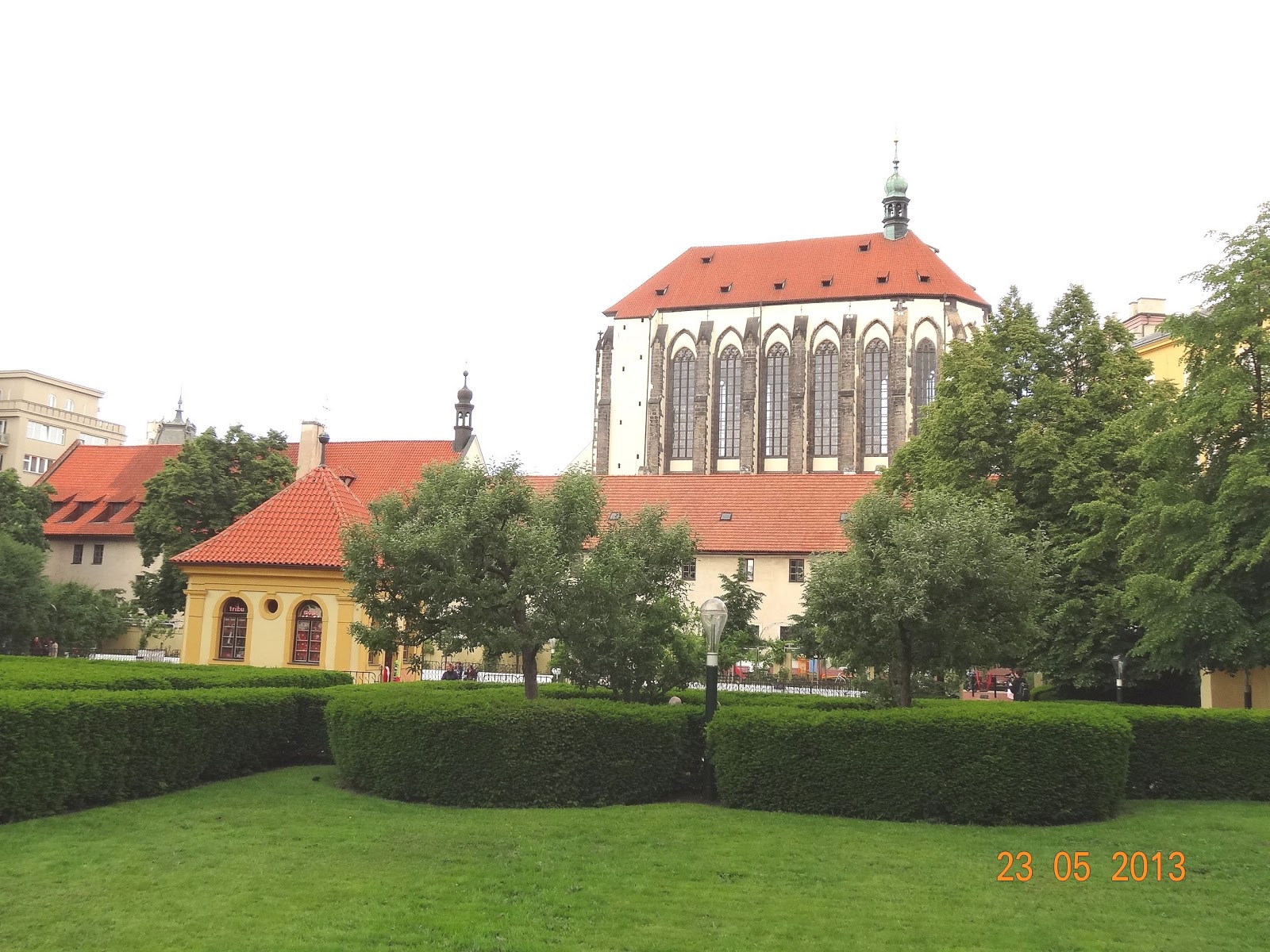 Answer to the question concerning the picture of Hotel Jalta: staircase in a residential area of ​​the hotel